Brexit and the pandemic have threatened the UK’s stance as the region’s financial hub. Eyes turn now to the temporary waiver on clearinghouses that ends in June 2022. Governor Andrew Bailey warned that any disruption to clearing would threaten the financial industry. He added that since the process works between the UK and US and the EU and US, why would it be different between the UK and EU.

According to Howard Davies, NatWest Group Chairman, the city risks losing some operations due to Brexit. Stephen Cohen from BlackRock commented that market fragmentation could also result in higher costs.

Davies and Cohen were speaking at a Bloomberg conference where John Glen, the UK’s Economic Secretary, outlined the country’s plans to facilitate inter-company transfers. According to Davies, the government should focus on areas that could potentially lose some financial activity. He added that London should focus on being the financial inter-mediator for Europe.

Davies mentioned that the city would remain Europe’s largest offshore financial centre but could lose some domestic business. That’s because the EU requires some activities to be located in certain areas. On market fragmentation, Cohen mentioned that it would cost companies and other clients more to do business. Still, ESG and green financing offer opportunities for the UK and EU to coordinate.

For workers, Davies expects hybrid working to continue. NatWest had reduced the number of in-office staff due to the pandemic. The figure stands at 15% currently, but Davies expects that to increase to 50% by year-end. According to Davies, that poses risks for London’s sandwich bars and transport network. 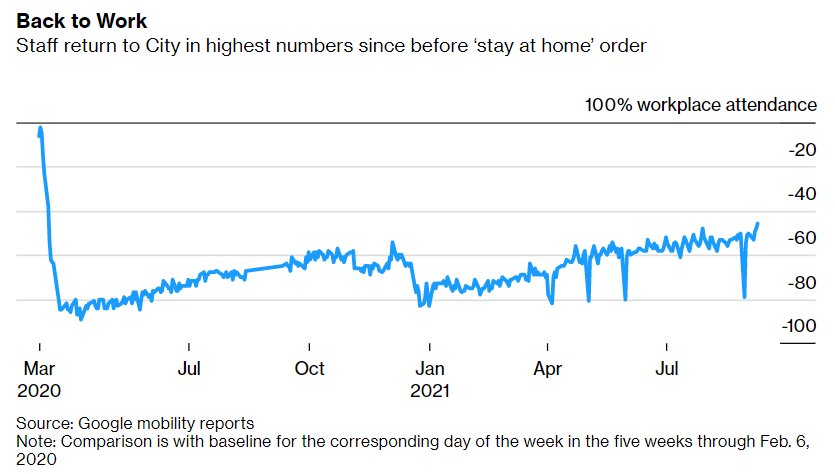 Glen mentioned the government could have plans to move internal staff to the UK ready within six months. He added that access to talent is very important, coming at a time when the country is facing record job vacancies as fewer EU workers move to the UK. Glen plans to visit the US to enforce bilateral relations.

Sadiq Khan, Mayor of London, urged the government to change its immigration system calling for a Covid recovery visa. That would allow firms to hire overseas talent in industries struggling to find staff like haulage and hospitality. He added that the existing sponsorship visa process is extremely costly and takes too long to bring the talent.

On the fashion front, Caroline Rush from British Fashion Council said she’d like to reinstate tax-free shopping for overseas visitors. She added that the industry should have a framework that protects British design and intellectual property. Attracting the right talent post-Brexit should be on the top of the industry’s agenda.

In July and August, Amsterdam managed to beat London as the top share-trading centre for Europe, with average daily trading totalling $9.75 billion. TheCityUK also mentioned that cross-border bank lending dropped to 15.2% in 2020 compared to 17.8% a decade ago. The global share of hedge fund assets also fell to 14% in 2019 compared to 20.7% in 2010.

Still, positive signals come from Czech Eurowag’s decision to float its shares in London instead of Prague. CEO Magdalena Bartos commented that the LSE offers a diverse pool of long-term, high-quality investors who understand technology. The raise would add to the $5.7 billion raised this year through IPOs on the LSE by East European companies. The figure compares to the $4 billion raised through home-turf listings. So, the government has much work in-store to maintain its stance as the region’s finance hub.

READ ARTICLES ON THIS TOPIC

Grayscale, BNY Mellon team up in prep for Bitcoin ETF

MOST READ ARTICLES OF THE WEEK

MOST READ ARTICLES OF THE MONTH

The UK reports improved employment data, what does that mean to investors?

MOST READ ARTICLES IN THE FINANCIAL FORUM